It’s another guest blog by Joe!

Traveling for five weeks is very challenging until you stop moving.  Sue & I started our journey with two suitcases, a tote bag (for books and crossword puzzles), and a technology backpack (laptop, iPad, cables, cables, cables).  They’re not easy to manage between 2 people, especially 2 people trying to take multiple trains and busses in Europe.

European transit systems tend to concentrate route stops for several lines in one place.  Since the cities are relatively small, the only way to do that is vertically.  Sue & I have gotten better at hauling ourselves and our materials up and down flights of stairs, escalators, and elevators, but not much better.

We added some luggage weight in Bristol, so making it to the Eurostar that would take us from London to France was that much more complex.  We were staying around the corner from the British Museum in London, so we snuck in a couple hours of culture and history before catching a bus to King’s Cross/St. Pancras.  Note the slash; there are 2 stations at that stop.  The Eurostar leaves from one of them.  Guess which one we entered first, suitcases wobbling and shoulders screaming.

Once we got to the right station and boarded the train, the ride under the English Channel was relatively smooth, even including an airplane-style meal & beverage service.  We were met at the Gare du Nord by Sue’s brother Jon.  He and his wife Kate (whose wedding I was lucky enough to perform on October 2010) volunteered to get us settled into our rented apartment in the 3rd arrondisement, even helping lug the technology bag all the way from the station.  We were met by the apartment owner, who took us on a tour of the place, and we were captivated by its cuteness, including the mirror that is also a TV.

After pizza and an excellent night’s sleep (soon to become a trend), we settled in on Tuesday, wandering around the neighborhood and shopping at the wine, cheese, and bread shops.  We met Jon that night to see Shellac, featuring his friend Bob Weston.  I was nervous going in, but we both enjoyed their show, and will see them the next time they’re in the Bay Area.

Wednesday, we finally made it to the Louvre.  Sue’s been regretting not having gone when we were here in October, so Jon & Kate (who have a museum membership) took us on a “bring a friend for free” night.  As she mentioned, we saw the Mona Lisa surrounded by picture-takers, the Venus De Milo (also surrounded by picture takers), and Napoleon III’s Apartment, a ridiculously over-decorated set of rooms commissioned by the emperor himself and currently featuring equally gaudy modern art by Wim Delvoye.  We accidentally stumbled into a preview for the Delvoye exhibit, so we got to witness the heavily tattooed artist sitting with his back to the crowd in one of the 19th century chairs. 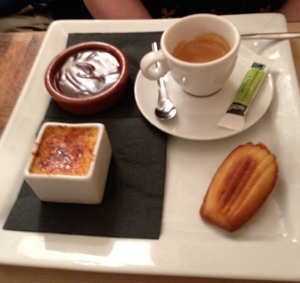 Sue & I were both disappointed that the Scandinavian rooms had no Swedes, but were taken aback by the breadth and scale of the Rubens’ Marie di Medici series.  So much detailed work on such large canvasses!  The Louvre is like that – so much art it’s hard not be overwhelmed quickly. We never saw the Egyptian or Greek sections, yet we left exhausted.  Dinner & dessert at Les Fines Gueles rejuvenated us for our walk home.

Thursday was sunny, so we walked to and through the Jardin de Luxembourg, just one of the many beautiful and well-maintained parks in Paris.  If you aren’t surrounded by streets going every which way in no predictable fashion, you’re staring at a green plot of land tended for maximum peace and relaxation.

I spent Friday catching up on work and those crossword puzzles I mentioned.  I’m really enjoying having an actual vacation, where I do nothing for hours and feel no guilt about that.

Note from Sue: I went to Les Invalides and saw Napoleon’s tomb (an enormous coffin under a sky-high dome), as well as many, many suits of armor. We also enjoyed some macarons from Laduree, and I was happy to note that the famous shop has opened a branch in Stockholm. Maybe I can try every flavor before we head home!

Saturday, Sue went to the Conciergerie, a museum that was a castle for many centuries before being turned into a prison during the French Revolution, which seems, the more I learn about it, like a necessary event that turned into a nasty bit of business rather quickly.  Lesson: don’t repress masses.  They get angry about that.

Sue, Jon & I reconvened at the CiteCine in Bercy.  We passed the Bercy Theatre, site of the first of several Kanye West/Jay-Z concerts (Kate & Jon have tickets to one later this month), at 3:30 PM, and people were already lining up to get general-admission places on the floor.  I’m guessing they played their traditional encore of “N*****s In Paris” especially well tonight.

Sue saw MOONRISE KINGDOM, the latest Wes Anderson film.  Jon & I saw PROMETHEUS, the alleged ALIEN prequel. Spoiler alert (skip to next paragraph to avoid): it is an ALIEN prequel – an overlong, underplotted ALIEN prequel.  None of the characters are interesting.  The special effects are good, and the 3-D works well, but there’s not really a movie under them.

Yet another delicious dinner and a brisk walk home – time to weigh in.  I’ve gained about 5 pounds on the trip so far, but Sue’s stayed even, most likely because she’s been walking about 6-8 miles a day while I stay home now & then.

This trip to Paris is much more relaxing than the first, because we’re  sleeping well and exercising more.  The day lasts so long.  The cafes are jammed with people eating (expensive – 15 Euros!) hamburgers as we walk home in 65-degree weather at 10:30 PM.  We’d better enjoy it while we can.  The forecast for next week in Stockholm is rain, rain, rain.